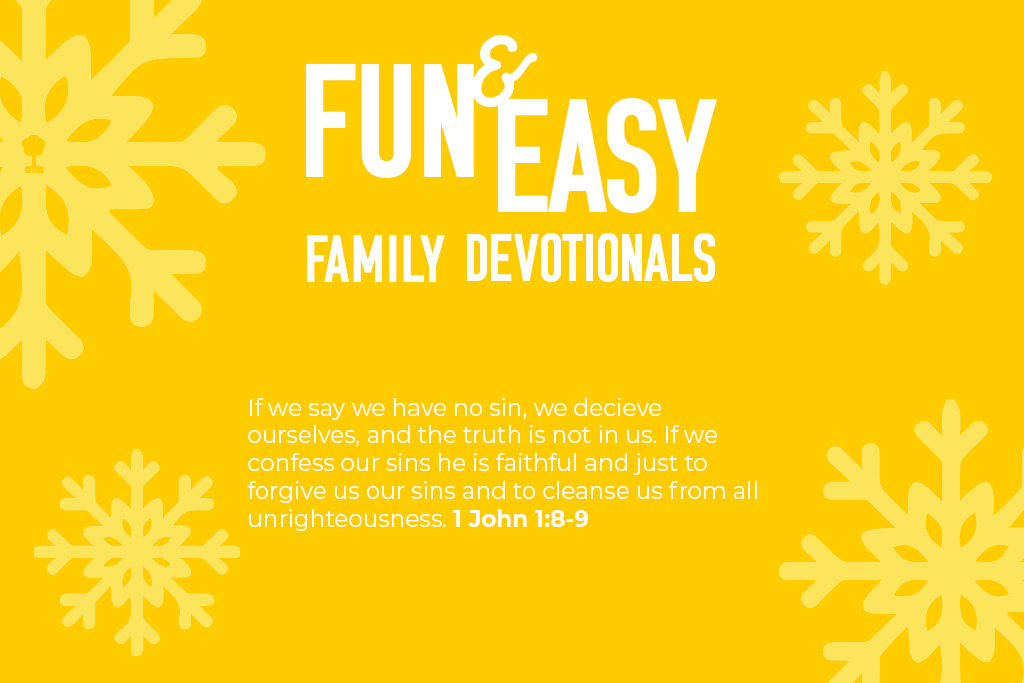 “If we say we have no sin, we deceive ourselves, and the truth is not in us. If we confess our sins, he is faithful and just to forgive us our sins and to cleanse us from all unrighteousness.” I John 1:8-9

Parent Note: This devotion acknowledges the reality of divorce. It also illustrates the power of forgiveness. You may want to read through it on your own at first to see if it’s appropriate for your family.

“June, I want a divorce.”
“Lamar, I know you’re not happy, but I want us to stay together. Don’t just throw away thirty-seven years of marriage.”
“Well, just leave me alone.”

That was the start of a prolonged period of silence between June and Lamar. They lived in the same house, but they rarely saw one another. If they happened to cross paths in the kitchen, they never spoke, instead leaving short notes on the fridge for the other to find.

Days of silence turn to weeks, then months, and then years. June had grown very bitter and angry towards Lamar, but she still didn’t feel it would be right to divorce. So instead, she began to pray. She began to pray for Lamar to change, but then, God began to work in her heart. She owned up to the things she had done to contribute to the distance in their marriage. She asked God to forgive her of her sin of anger and bitterness. She received God’s love and forgiveness in her life, and then she began to pray for Lamar again.

One day she approached him, “Can I hang new lights out front?”
Lamar gave a short response: “No.”
After their brief conversation, she decided to tell him she still loved him and was sorry for things she said in anger.
These were the first words the couple had exchanged in three years.

Later he came to her, asking for help on a home repair. She did it, but he made no sign of appreciation or thanks.
Then, six weeks later, he came back to her and said, “If you want to, we’ll try to make a go of it.”

It wasn’t long till they were experiencing the full joys of marriage, delighting in one another, laughing, kissing, and becoming friends again. It all started with confession of sin and forgiveness. June thought Lamar was the problem. Yes, he had his issues, but she couldn’t control or change him. The only person she could change was herself. The change in their marriage began with her own confession before God, and then asking forgiveness for her part from Lamar. This won’t guarantee other people will change, nor does it excuse how other people act, but all you can control is your own behavior and your own heart before God.

No one is required to share: Take a second to just think before you answer: Is there someone you’ve been blaming for a problem in your life? How can you own your part in the situation and ask God to forgive you? (Parents, share an example from your childhood if something comes to mind.)

God, help us to be open to hearing from you about our own sin, instead of focusing on the sins of others. We know that we can only control ourselves, and even that can be difficult enough. Help us to be quick to repent of our own sins and to look to you for the strength to forgive others.

This is a shortened version of an article that appears on FamilyLife’s website. There are many other fascinating parts to this story. Read the full version here:

Check out the Next Devotion from 1 John 4:11 Here!