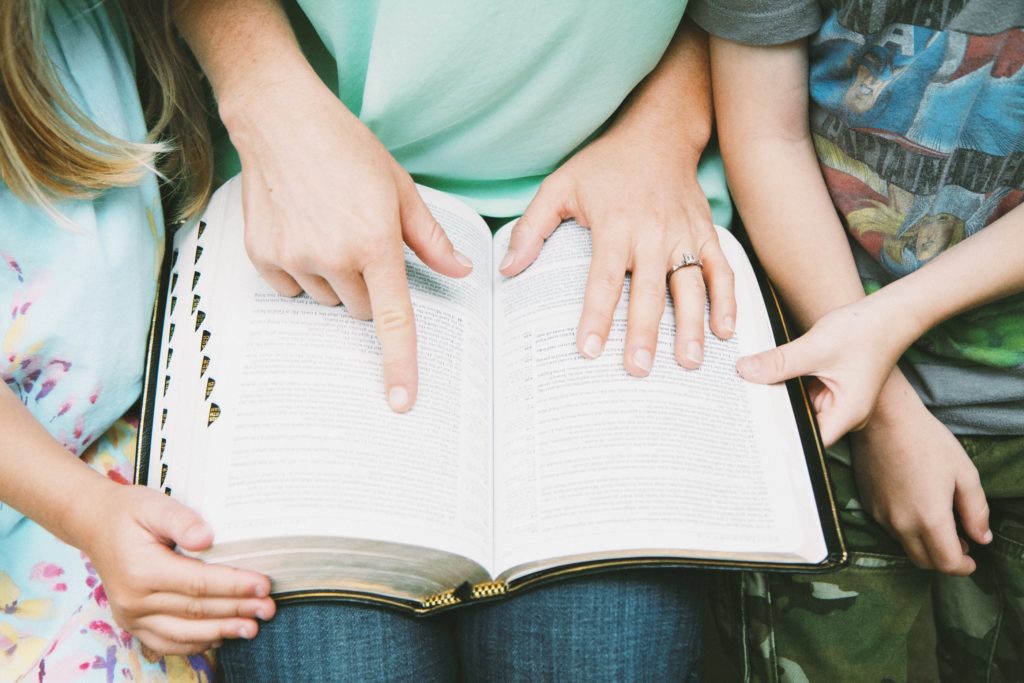 Instead of trying to unpack long sections of Scripture or a complex theological concept, focus on small sections, just one verse, and sometimes even just one word. This helps keep family devotions short and focused. For the 20-in-2020 family devotions, we’ve designed them to be read in about five minutes to try and keep things moving. The goal is to do something, to start building a habit, not to do it perfectly, especially if your family hasn’t been in the regular practice of doing family devotions together.

Stories capture the heart and grab attention. That’s why we love movies and novels. Rather than expounding with a detailed analysis of various abstract theological concepts, tell a story that draws your family in and launches a conversation. It’s no surprise that Jesus often told stories in his teaching (Prodigal Son, Good Samaritan, to name a few). Starting a new habit can be hard, so we recommend doing family devotions at the dinner table, either at the beginning or at the end of the meal. Attaching a new habit to an old habit makes it easier to start. If you’re on the go as a family and don’t eat at the table much, then do it as you’re pulling out of the drive-through, even if you’re not all together. It doesn’t have to be perfect. There probably will never be a perfect family devotion. But a story might have a chance of drawing everyone in and grabbing their attention.

If you can think of a personal story to share, especially if it is from your childhood, then go for it! But no pressure – let that come naturally. It’s better to do something than nothing. Just read the story we’ve provided (like this blog here about Winston Churchill escaping prison) and don’t let the lack of a great personal story keep you from doing a family devotion.

End the devotion with one question. One simple question that ties the story to the verse and gets everyone talking about the big idea. The goal is to get everyone talking and engaging. It’s not about who is right and wrong, but about connecting.

Not every devotion or question will lead to a thrilling exchange of ideas. So keep your expectations low. If no one has an answer to the question, then just wrap it up. Maybe give your own short answer and then pray and close it down. Don’t take it personally and don’t force everyone to engage. At first, you’re just trying to build a new habit as a family, so try to keep your attitude positive and keep the tone light and move on if others don’t seem interested.

Remember that the easiest part of memorizing Scripture as a family is just playing a song. Don’t worry about trying to ‘work’ at memorizing the verse together during your devotion. Just find a time to let the song play in the background – maybe before dinner while the final meal prep is coming together, or after while cleaning up. Or in the car at some point.

You don’t have to demand full attention – just let the song play. They don’t even have to like the song. Music is such a personal choice, so there’s always going to be some songs they like better than others. That’s ok. Seeds songs are made for kids and enjoyed by all. The main point is that songs make Scripture sticky. So let them play, keep the devotion time simple, and try to build a weekly habit as a family to gather for a devotion time at the dinner table or in the car.